We have carried a considerable contrarian bet through the third quarter of 2016. That is, a strong bias toward local assets versus those offshore, and an aversion toward cash in favour of higher yielding competing asset classes. This positioning is underpinned by the following sub-themes;

Equity still remains a favoured asset class of ours. There are counters with dividend yields similar to that of cash, with earnings prospects we believe will facilitate a total return above that of cash. This may be true for both domestic and offshore equity, but significantly more so for the former.

When the red line in Chart 1 drops below the mean (0.53) it signals that domestic equity is cheap relative to offshore equity because the former has higher dividend yields. We’ve used Standard Bank as a proxy for our domestics as it’s our biggest local equity bet. While not as cheap as it was at the beginning of 2016, Standard Bank was still more than a standard deviation below its mean as Q3 kicked off. 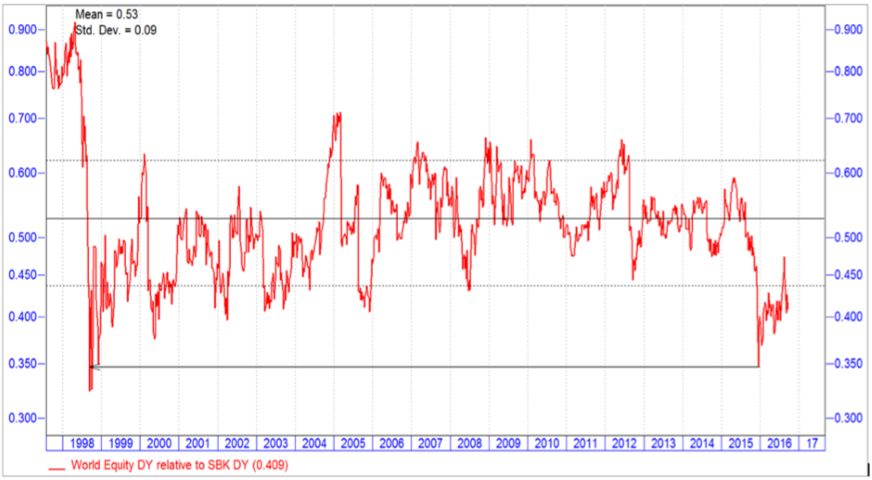 Our preference of domestic equity over its foreign alternative calls for a neutral-to-bullish view on the SA rand. We concede that calling its direction is complicated. But when it reaches levels of undervaluation (based on PPP) against the US dollar seen only once in the last 30 years, justifying a more optimistic view on the rand is easier.

We don’t hang our hats purely on valuation as the rand reacts to a plethora of variables over multiple timeframes, but it does hold significant weight in our investment process. Above the red line in Chart 2 signals undervaluation of the rand against the US dollar. Mean reversion (a stronger rand) has been in play since the beginning of 2016. 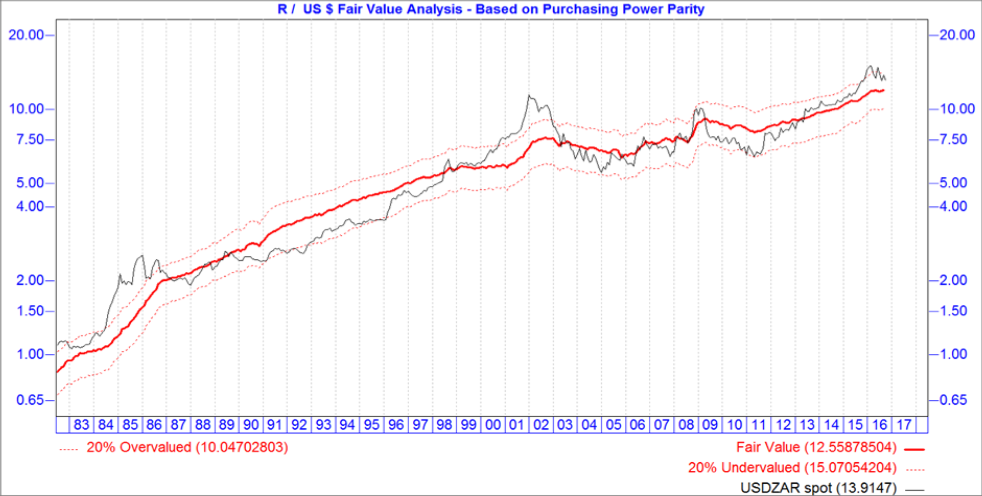 On a more granular level, our domestic equity exposure throughout Q3 2016 was concentrated in interest rate sensitive (IRS) counters in the banking and retail sectors. We’ve held the view that these shares harbour rerating potential to be catalysed by dull but better than expected earnings announcements.

And, as is important with all the investments we make, we believe the macroeconomic protagonist – falling bond yields in this case – will also support a rerating of IRS equity.

Our highest conviction call in Q3 2016 was that inflation expectations would fall, based on a stable to stronger rand and falling oil and maize prices, causing domestic bonds to rally.

This thesis was further underpinned by the substantial yield-pickup on offer for global bond investors and the resultant carry trade. Looking for multiple confirmations in this manner is part of our investment philosophy DNA. We consequently held a significant portion of assets in SA Government Bonds.

The proverbial elephant when discussing our domestic bonds is the possibility of a sovereign credit rating downgrade. We comprehensively covered our views on this topic in our piece, “Does junk status even matter for SA bond investors?” Our conclusion was that inflation is the ultimate driver of bond yields, as evidenced in Chart 3, and that downgrades are generally priced in long before the announcement is made. The muted response to Turkey’s second downgrade to junk bolsters the evidence we put forward. 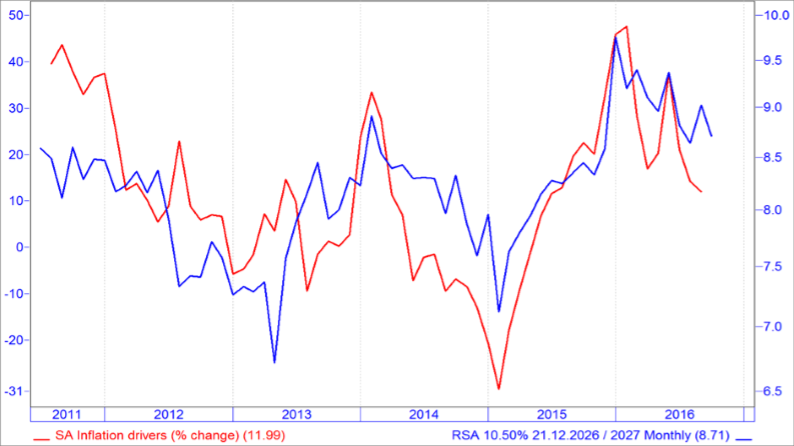 Adding to the comfort with which we’ve held SA Government Bonds is the general refusal of global inflation to obey the desires of the major central banks and their monetary policies. The global economy remains in a “Goldilocks” state where growth is broadly steady, but not strong enough to rouse inflation.

And with DM rates near zero, this positions higher yielding EM debt in a sweet spot; lower inflation and poor growth prospects strengthen the case for interest rate cuts and this should provide a capital return from their bonds in addition to the substantial yield pickup already on offer.

Emerging from the developed shadows

The downward trajectory of developed market interest rates looks to have found a bottom near zero, as facetious as that may sound. On the other side of the coin are the emerging economies – many who use interest rates to manage inflation – who have raised their interest rates as their currencies depreciated against the US dollar post 2010.

But EM currencies have stood up to the greenback this year. And, as a result, pockets of the emerging world have seen an improvement in inflation expectations, repealing some of the hawkishness of their central bank policies.

At home the SARB has, for the first time, hinted that the rate hiking cycle may be over. If offshore assets are indeed expensive (our view) and the recent interest rate trajectories of both EM (upward) and DM markets (downward) reverse as suggested in Chart 4, it would surely galvanise the relative outperformance of domestic assets over those offshore, a trend we’ve seen year-to-date. 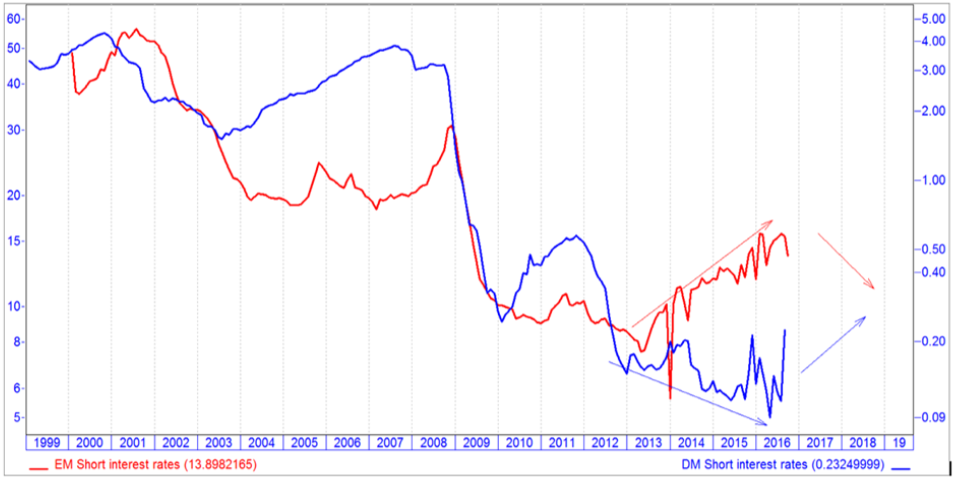 That being said, not all offshore assets are overvalued (compared to our domestic assets) and those should be considered, especially from a diversification perspective. As 2016 kicked off, the British pound was more than 20% overvalued against the rand, roughly in line with other hard currencies.

But Brexit dragged the pound back to fair value (again on a PPP basis) against the rand. We subsequently added pound assets to our portfolios, albeit incrementally given the uncertainty around the longer term consequences of leaving the European Union.

So much is dependent on the behavior of the US dollar. It has come up trumps (ahem) against other hard currencies as a safe haven in a directionless and unsynchronised global economy. The clamouring for the greenback, and its ensuing appreciation, has forced many competing assets classes into submission.

But the start of 2016 saw the US dollar looking more expensive (against a host of competing currencies) than in previous years. The black line in Chart 5 pits the US dollar against an equally weighted index of the Euro, Yen, and Australian dollar. Below the red line signals an overvalued US dollar – as much as 20% overvalued against the specified basket at the start of 2016. We’ll return to the pink line shortly.

The overvaluation of the US dollar has begun to manifest itself in the trade balances between the US and its major trading partners. Both Europe and Japan are running significant trade surpluses, with Germany in particular looking strong with a record current account surplus of 9%, visible in Chart 6 below. This suggests the Euro is too cheap relative to the US dollar.

We are not proponents of the so-called “carry trade” insofar as it attempts to justify a further strengthening of the US dollar as Yellen raises rates.

In any case, it is difficult to reconcile the fussing around potential US interest rate hikes with the proposed magnitude of said hikes; 25 basis points is surely not a game changer for those making asset allocation decisions. In addition, the continual downward revision (3.5% to 2.8% in the last year alone) of the long-run ‘normal’ Fed Funds rate means that the rate hiking path has an increasingly shallow draft.

Will this incremental yield offering be enough to power the greenback further into overvalued territory? We think it unlikely.

Returning to Chart 5 briefly, a stable-to-weaker US dollar, combined with the gradual re-acceleration of global industrial production we’ve seen year-to-date, usually permits rising commodity prices. This brings our cyclical domestic equity into focus, particularly because their profitability levels, which have been decimated, are the most important variable in our equity selection process.

As a result of the bombed-out profitability and stable-to-improving commodity prices, we held a portion of cyclical counters in our portfolio throughout the quarter.

Chart 7 uses BHP Billiton (another of our prominent equity holdings) as an example of this thesis, with the black line illustrating how dividends (relative to the market) have declined drastically. The red line shows the relative share price underperformance of the diversified miner against the All Share Index as a consequence of the falling profitability and their ability/willingness to pay dividends. 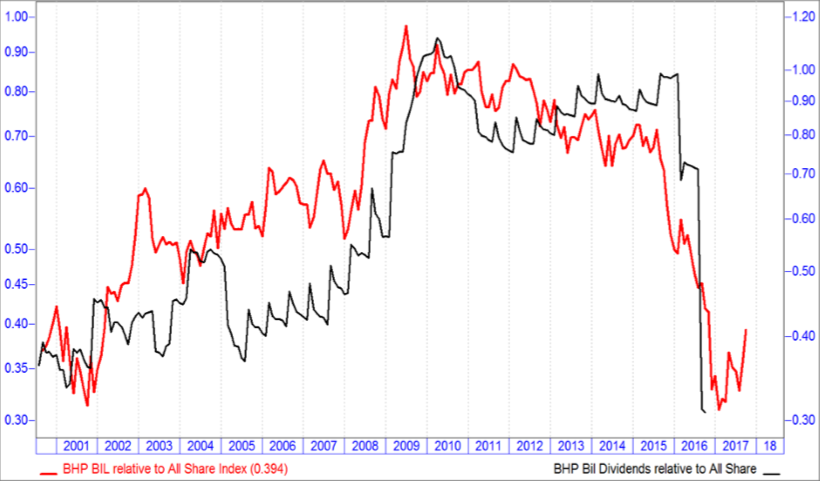 Our research points to SA assets (bonds, IRS equity, and cyclical equity in particular) being relatively well priced when paired against offshore assets. Skewing our portfolio toward these assets requires the continuation of rand strength, the resultant easing of domestic inflation, and a more bullish outlook for commodity prices. While any number of shocks could derail this thesis, we believe the underlying fundamentals on which it is based are material enough to exert the required influence.

Chart 8 pits the real effective exchange rate of the rand against the US dollar in blue, against the relative performance of SA assets (50% bonds/50% equity) over offshore assets with the same asset class weighting. Simply put, a domestic-heavy portfolio requires a stronger rand. 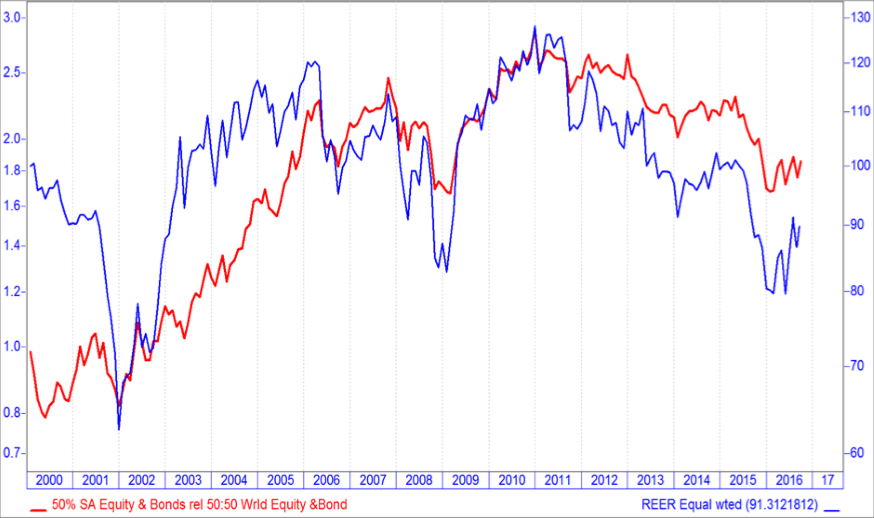 3 things for a higher gold price

A stronger rand into US rate hikes?