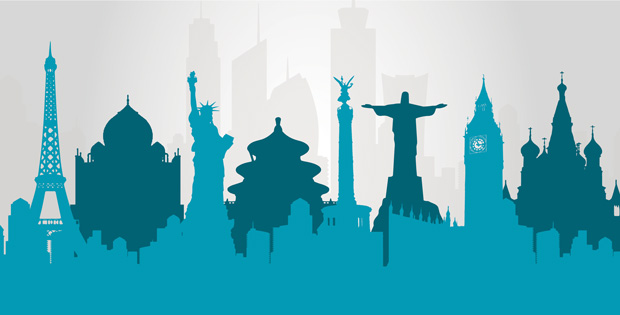 Missed out on the rand’s rally? Değerleme

Appreciate the magnitude of rand strength we saw in 2016. Against the world’s hard currencies, it unwound 20% plus of undervaluation (we value currencies using the PPP methodology), reversing multiple years of weakness in twelve months. Its strength continues to be a feature in early 2017, on what we believe to be a reacceleration of global trade, a concomitant rise in metals prices, and a (fragile) domestic politicking hiatus.

The rand now looks to be fairly valued against most developed world currencies. This has important repercussions for the weighty domestic bias we carried in our portfolios through 2016 because we can no longer rely on an attractive PPP valuation for further rand strength. However, if the stronger global manufacturing trend continues to fuel the rise of commodity prices (our house view), the ZAR can strengthen further.

In fact, historical PPP charts suggest that currencies, including the rand, often transition from a valuation support to one more cyclical in nature. This is evidenced by their tendency to break well through their fair value target on their mean reversion journey.

The core principle behind the investments we make is to marry the valuation with the cycle. The former no longer exists for the rand. So, to temper our bet on the ZAR and the assets thriving off its strength, do we move offshore?

Well yes, but not in the conventional manner. The rand is at fair value against most hard currencies so we’re indifferent to them as potential investment conduits. We found something more interesting instead.

While the rand’s move against hard currencies last year was impressive, it quietly obliterated some of the competing emerging market (EM) currencies, moving from levels of significant undervaluation, to ones signalling material overvaluation.

Turkey owns one of those currencies – Değerleme is Turkish for ‘valuation’. But we could just as easily have used the Russian, Spanish, or Portuguese translation for valuation.

If that’s a bit cryptic, we’re talking about the potentially attractive valuations of the Turkish lira, the Russian rouble, the Mexican peso, and the Brazilian real in relation to the rand.

All were subjected to devaluation at the hands of a rampant US dollar amidst falling commodity prices between 2011 and 2015. All suffered inflation spikes and bond yield blowouts. And all saw a meaningful derating of their interest rate sensitive (IRS) equity. These are the currencies we have moved into ‘offshore’.

This allocation to EM assets is less a generic capital flight from our erratic country and more an extension of our fondness for South African IRS assets.

Said another way, we have simply augmented our already established exposure to EM IRS assets. Adding these alternative EM players to the mix was premised on their superior valuation proposal relative to their SA peers.

Show me the valuation

Great offshore investments are those that deliver a strong domestic performance, which is then amplified by an appreciating currency (relative to the currency of the investor). Both levers are there for the yanking within the IRS space of the EM markets previously alluded to. Let’s look at the evidence supporting the currency lever first.

Our indifference toward investing in hard currencies – due to the cross rates being roughly fair value – is illustrated in Chart 1, which plots the USDZAR pairing. The red line is the fair value calculated using the PPP methodology.

Chart 1 – The rand is fairly valued against the US dollar 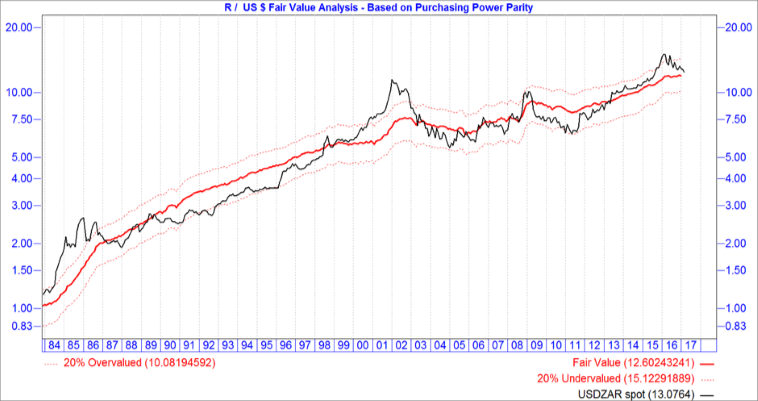 In contrast, Chart 2 shows how attractive the Turkish lira is against the rand after the violent move in 2016, transitioning from being 20% undervalued to 20% overvalued.

Chart 2 –  The rand’s drastic move against the lira 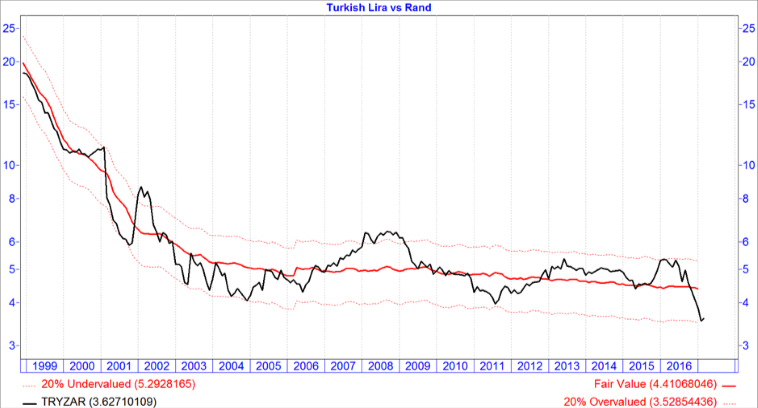 A similar story, although not as jarring, has unfolded in the relationship between the rand and the Mexican peso, visible in Chart 3 below. 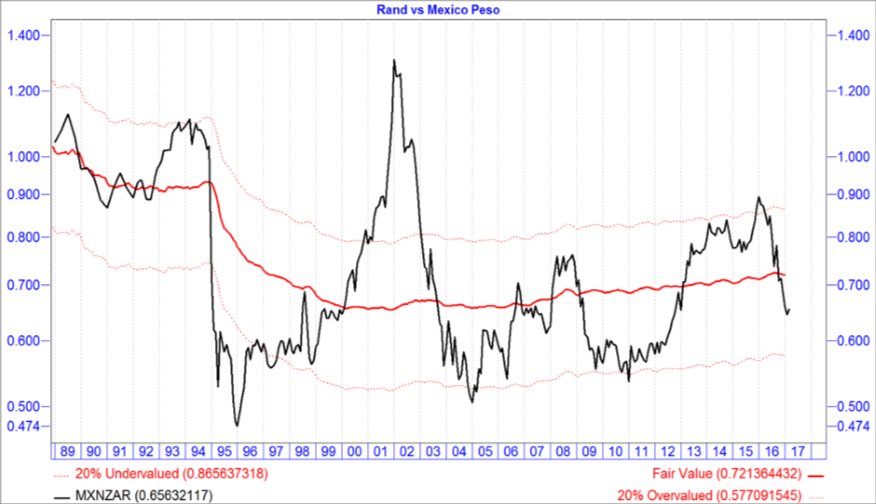 Looking solely at currency valuations then, it makes sense to invest our rands in select EM currencies, rather than developed market (DM) currencies. It’s important to reiterate that we’re not expecting the rand to weaken, but that these alternative EM currencies have more upside potential from a valuation standpoint.

The cycle is the catalyst for these EM currencies

Why do we think the lira, rouble, peso, and real will show strength from here? Quite simply, our research into the state of the global economy propounds that global manufacturing is on the rise, which means global trade will be strong, which has historically supported EM currencies against the likes of the US dollar – their steep undervaluation against the latter (and the rand!) adds a margin of safety to this hypothesis.

If the cycle and valuation work in tandem for these EM currencies, as we suspect they will, how best do we benefit from their strength?

What goes up, must come down

An appreciation (or even a period of stability) of these currencies against the US dollar (and other hard currencies) will have a disinflationary impact on their economies. And given the base effect now in place thanks to the EM inflation spikes we’ve seen, that impact is likely to be a material one.

Chart 4 illustrates the divergence of emerging and developed market inflation born out of the collapse in commodity prices between 2011 and 2015. As the cycle turned and EM currencies began to show resilience, the respective inflation trends – up for EM and down for DM – reversed.

Chart 4 – The reversal of EM and DM inflation trajectories 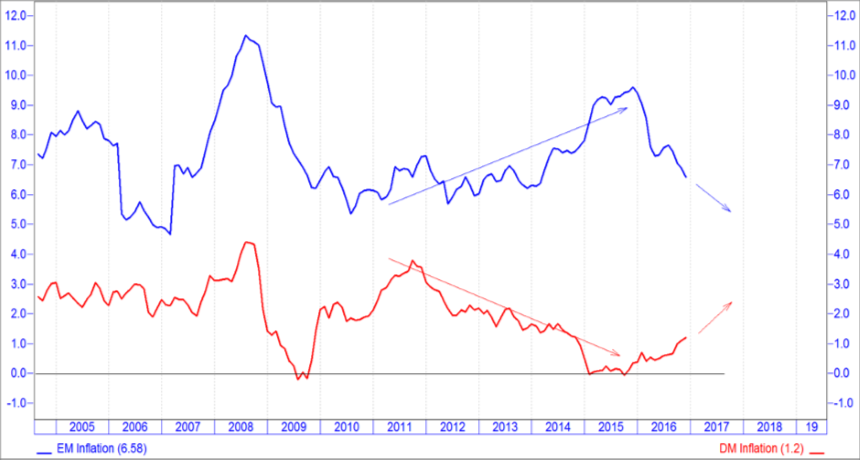 Falling inflation and the increasing likelihood of interest rate cuts in our chosen EM territories are crucial themes to the investment case we’re putting forward here. This has already played out to some extent in both Russia and Brazil, and even more so in India. The result being superb performances from both bonds and interest rate sensitive equity in 2016 – these are the asset classes that should benefit most from stronger domestic currencies and the accompanying fall of inflation.

To walk our talk, we shortlisted some of the most liquid interest rate sensitive equities in each of these markets that has, over time, shown a robust correlation to their respective long-dated bonds – what we call bond proxies. We touch on four of them in the next section.

The table above serves to compare four of the EM banks we’ve invested in with two of our domestic deposit takers-slash-lenders. Some noticeable detail; Sberbank and Itau are true banking giants by market cap; the foreign banks have lower dividend yields but higher forecasted earnings growth than our domestic players; Turkish and Mexican banks have lagged their EM banking peers in terms of share price performance measured in US dollars. A short bio of each bank follows.

SBERBANK: In existence for more than 170 years, the bank services one million corporate clients and 135 million retail customers. It owns a chunky 53% of the mortgage loan market in Russia.

Sberbank derated heavily as the oil price and rouble collapsed in 2014. But as the spot price bottomed and the trend began to reverse, a significant rerating of the bank took hold. The bank predicts loan growth of 10% or less in 2017 based on an oil price of $40-$50 per barrel, significantly less than the 25% per annum they have achieved over the last five years.

End game: Much like the rand, the rouble can continue to strengthen on the cyclical rally we’re witnessing. With roughly a third of all Russian debt denominated in US dollars, a stronger rouble will ease non-performing loan (NPL) pressure.

In addition, the more dovish monetary stance taken by the Central Bank of Russia should, in due course, whet the appetite for borrowing.

ITAU: The Spanish phrase Itau Unibanco translates, rather blandly, into “really big bank”. One of the largest credit card issuers in Brazil, the bank boasts 3,900 branches. The capital flight from Brazil during 2014/15 period put significant pressure on Itau’s margins as their cost of funding increased and the savings pool used to extend mortgages dried up.

End game: A true bond proxy, Itau’s share price has, historically, been very well correlated to movements in the domestic bond market. Should bond yields continue to compress on the back of an appreciating Brazilian real – thanks to better commodity prices – the share could continue to rerate.

Itau’s management is forecasting a 30-40% drop in impairments for 2017 due to a healthier corporate loan book. They will however need to reverse a negative trend in loan growth to offset the lower interest income that accompanies monetary easing. Rising consumer confidence suggests loan growth should indeed accelerate.

GARANTI: Has operations in Turkey, Netherlands, Germany, Romania, Russia, Luxemburg, Malta, and Bahrain. It is the second largest private bank in Turkey.

All Turkish banks have suffered under the extreme devaluation of the lira. Not helping Garanti is the roughly 40% of their loan book denominated in currencies other than the lira. Not surprisingly, bad debts at the bank increased by 25% year-on-year to November 2016 as the lira’s purchasing power declined.

End game: While not a pure commodity currency, the Turkish lira has historically shown strength when global trade improves.

Should a stronger Turkish lira eventuate, this should help curb inflation and eventually allow for the much-needed monetary easing that the economy so desperately needs.

Turkish banks are arguably some of the cheapest in the world on a price-to-book measure and should bond yields and the lira stabilise, this should  go someway to unlocking the value held in the share.

BANORTE: Specialises in corporate loans to the retail and manufacturing industries in Mexico. They also have an unsecured lending arm, and own a bank (just over the wall) in Southern Texas called Inter National Bank.

The Mexican peso has depreciated by nearly 40% against the US dollar since mid-2013. Consequently, interest rates have been hiked (to curb inflation) and bad debts have risen, pushing non-performing loans close to their all-time highs.

End game: Like Turkey, Mexico is not a pure commodity currency but usually benefits when global trade accelerates because of its export capabilities.

Trump does add a complication though. 70% of Mexico’s exports find a home in the US, so any protectionist measures he implements will harm their economy.

His ability to alter the powerful economic forces behind the current status quo is, however, far from ratification.

The investment case in Russia and Brazil is less complicated because their currencies are well correlated to commodity prices. If global manufacturing continues to accelerate into 2017, supporting commodity prices, the rouble and real could appreciate further, allowing for greater monetary easing. This should translate into lower bad debts for the banks as corporate loan quality improves. Their loan books should also grow as consumer and business confidence returns.

We must acknowledge that we have already witnessed a significant rebound in both the rouble and real since 2016 and therefore the extent of runway in both these countries is now questionable, especially if the commodity cycle wobbles.

Turkey and Mexico are at a different stage in their currency cycle. Both are yet to show any meaningful strength against the US dollar and their banks have lagged as a result. But their currencies look to be among the most undervalued in the world. And hopefully, with an improvement in global trade, the lira and the peso will find support, inducing an interest rate sensitive rerating; patience may however be required.

We have held a bullish view on South African interest sensitive assets since global manufacturing began to reaccelerate in early 2016. However, the rand’s strength through 2016 necessitated a relook at our concentration in those domestic assets. Using a relative valuation approach, we diversified a portion of our domestic IRS bet into similar assets in EM currencies that are, importantly, undervalued against the rand. To bear fruit, this augmentation requires these currencies to strengthen, coaxing inflation and interest rates lower.

By diversifying our interest rate sensitive bet across other emerging markets, we have also reduced the impact that any rand-negative political upheaval may have on our portfolios.

Zuma doesn’t have a grip on valuations

Valuation no longer supporting the rand